Hiring Managers: You Might Want to Show Some Hustle on These Interviews

Not a good strategy for winning top talent. We get it. You’d rather be doing your actual job than running an interview process. But letting your indecision bleed through is no way to grow a team. Or run a business.

Jeff Smith and James Hornick will dunk on some of the most common ways companies repel talent.

Maybe even pitch a solution or two- in this case 10. Before we dig in all of our content can be found on talentinsights.hirewell.com. This week’s topic, hiring managers: you might want to show some hustle on these interviews. We had good times trying to figure out the title for this one.

Yeah. So here’s the thing, let me lay it up. Companies are losing people if they’re slow. That’s it full stop. The most on demand candidates have tons of options. Companies who are able to get people through the process are winning. Everyone who’s dragging their feet are losing. This is not a normal market.

I think what happened is companies that are used to working at a certain pace kept that pace going and didn’t realize that you could get away with things that were a little more broken a year ago, two years ago, three years ago, but you really can’t now. So that’s kinda what we want to talk about.

And when candidates feel like they’re the backup, when you’re not interested in them, they lose interest. They go to the next place that actually moved quick. And we’re seeing that every day. Yeah. And like, I don’t want this to become like hiring managers, all you gotta do is just like move fast.

That’s it. We’re just going to be butt hurt about you not moving fast. That’s not the crux of the argument here. We want to give like very specific examples and to your point, if we have time, we’re going to try and get through 10 with like a bonus 11. Yeah. Yeah. Let’s kick this off. Get into it. First one, the entire internal recruiter screen is a complete waste of time.

It’s as simple as that. If that’s the holdup on why you need to have another step just for having your internal recruiters to redo the work the recruiting firm did, you’re working with the wrong firm. Yeah. So that’s your fix. Find a different firm to work with. Yeah, totally. I think one of the things that- and we crowdsource this by the way, so these are from our actual recruiters.

Like another thing that came up was super slow feedback and it can be centered around the whole group in general from an interview, like team perspective, but more often than not it’s usually one or two egregious offenders on that panel that just don’t get their feedback back in a timely manner.

And you know, you’d wait a week before you get a thumbs up or thumbs down. And by that point, most of the time, those candidates are either not interested or they’re taking something else. The fix here is you have to create mandatory SLAs for feedback loops. And if somebody isn’t adhering to those loops, at a minimum you got to get them one-on-one and say, “Look, here’s the deal. This is getting to be the make or break. This is going to get us from point a to point B.” And if that doesn’t work, you put them on blast in a bigger forum, right? Yeah. It’s freshest in their mind right after they finished the interview. Make that part of the process. As soon as you get off the interview, provide your feedback to the rest of the team, every time.

Anyways, number three, waiting until you have a batch of candidates to start the interview process or requiring comparison candidates for a hire you make repeatedly over time. Like, I don’t understand this. If you’re hiring something that’s a repeatable hire, why you need to see multiple candidates before you move forward. I mean you’ve done this before, right? You know exactly what this market looks like and you know what a good candidate versus a bad candidate, who’s going to work for you and who’s not is going to look like. But also, it’s like you expect candidates to make tight decisions without them looking at other options.

Like, why can’t you do the same? Doesn’t make a lot of sense. Reciprocity is a beautiful thing. Like in that ilk, another thing that came up with scheduling things way far out like, “Oh, we’re super interested in this person. Let’s set up an interview for 15 days from now because I got to go hiking in the Appalachian mountains or something.”

It’s like, okay. I mean that’s fine. We all have cell phones, like we can show a little bit of urgency and commitment to the process and are we serious about hiring here? Is that basically the fix, right? Yeah. I mean your competitors aren’t waiting. I’ll tell you that right now. And maybe some of them are, but the one or two that aren’t, are winning.

So one it’s like, you don’t look like you know what you’re doing when you’re making up additional steps or adding onto the process. I understand things can get – it’s messy business, right? So it’s not impossible to knock this out. But you also have to have an idea of what your perception is with candidates and they think you don’t know what you’re doing, but just adding more steps in general, typically when it’s a last minute thing, it keeps pushing things further out, everything takes longer. And I understand that a lot of it is because you’re on the fence.

Anytime you’re asking your team, whether it’s your internal recruiters or external, is just to keep continually keep people warm it just, honestly, it makes everyone kind of look bad because they know what’s going on. They just they’d rather hear you say it than just live in limbo. So there’s your fix. I can’t recall the last time that a warm candidate ended up taking one of my jobs.

Flat full bore. Another thing in this elk is like the double approval process. So like, all right, you’ve got approval, the CFO has stamped it, you’ve got a nice PNL, you’re the hiring manager, you’re ready to roll, you get all the way through the hiring process… executive approval it’s needed.

I thought we already had approval. I thought this was already approved. It’s needed again! Look, get an approved budget and don’t undermine your hiring manager’s ability to make decisions. In seriousness, the way that, that looks not only the candidate, like let’s put that to the side there second, but just how deflating that can be as a line manager in usurping their authority to make their own decisions. I spent all this time. This is something you need to get your job done. You had your whole team put their time and effort into it, and then it’s either delayed or might not even happen in the end. Yeah. And it takes five days to get that approval, mind ya.

Yeah, it’s always because everyone’s busy, right? These two kind of go together. So seven and eight. So I’ll do the first one here. The rubber stamp that actually isn’t a rubber stamp. It turns out you just got it all wrong. The final step is meeting with the boss’s boss’s boss and it’s been laid up and this is a courtesy, they just want to meet you. And it turns out like they actually ruled you out. It wasn’t a rubber stamp at all. It’s funny and it’s it’s deflating, but the bigger question is it turns out there was one real decision, maker and that was the person at the very end and all the work done up until this point was irrelevant.

I mean, your fix is like if there’s someone at the end of the process, who’s the executive who has the authority to just like blow up your entire plan, that person should be talking earlier. That person should be in the first step. You should never get to the point where it just blows up at the very end, because you really- the amount of time everyone you wasted that point is just crazy. Yeah. I mean to that point, the other side of the coin is why are so many executives involved in some of these processes in the first place? I mean, I’m not- like I get it. If you’re a startup, you’re five to 10 people. Every hire is, I mean, it’s so crucial.

And it turns it from a sales conversation to a holy crap I’m being interviewed by the CEO of this company. And I would just argue, what is the point of that, right? Yeah. I mean, the fix is less cooks. Yeah.

Where are we here? Number nine. Okay, 30 seconds. During a debrief of members of a hiring team drastically changed their tune on somebody solely based on hearing one negative opinion from somebody. If you’ve got a whole interview team that’s into somebody and you’ve got one person who consistently can kind of change everyone’s mind single-handedly, that’s an issue because you’re going to keep running into like, having people get ruled out that probably were good.

This is why you need to have an honest feedback. So it’s not to say that one person’s opinion doesn’t matter, but we see this a lot where it’s just everyone’s on board until someone who’s got a bigger voice or is more persuasive.

That’s my take. Can we do the outro? Like if you want 10 and 11, you got to hit us up. So 10, 11 special bonus content. We’re short on clock- we’re actually over. That’s a wrap for the week. Thanks for tuning into the 10 minute talent rant, part of the talent insight series, which is always available for replay on talentinsights.hirewell.com- as well as YouTube, Apple podcast, Google podcast, Spotify and Amazon.

Jeff, thanks again, everyone out there, see you soon. 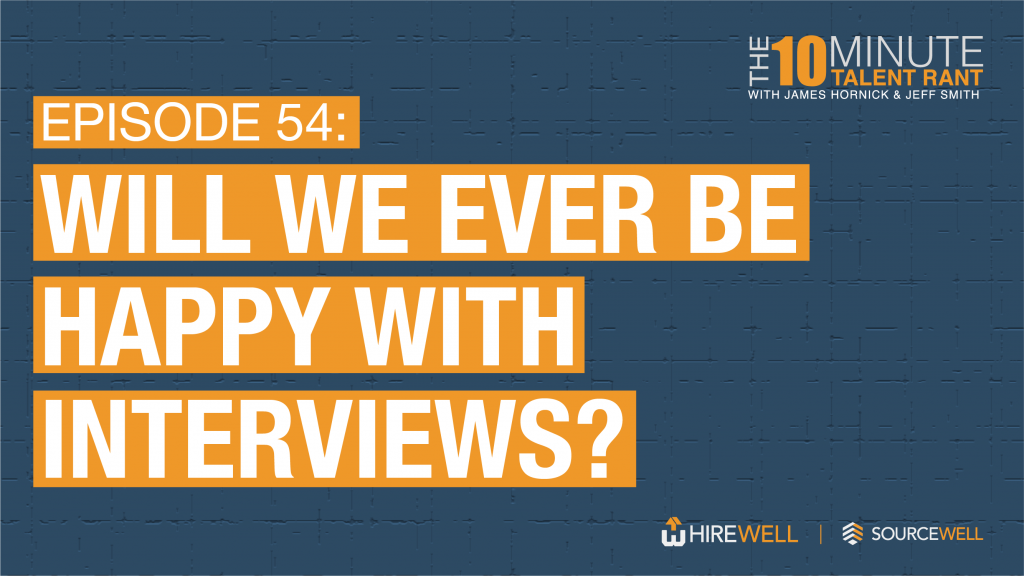 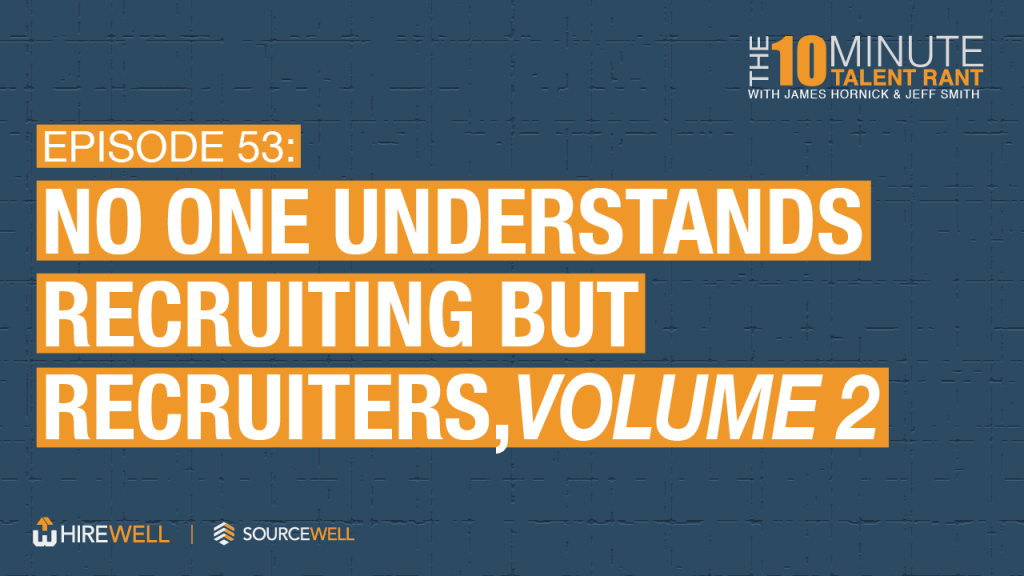 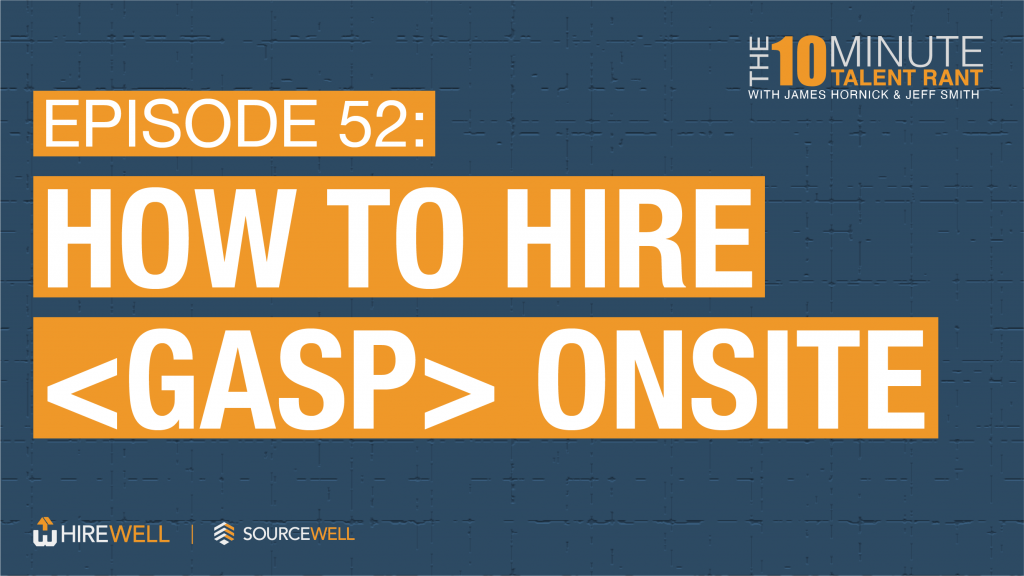 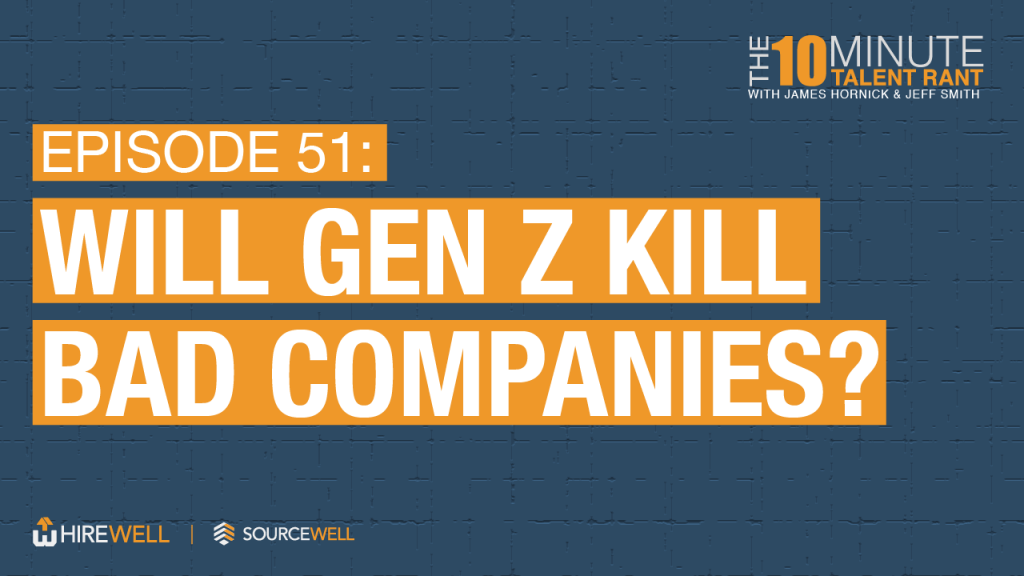 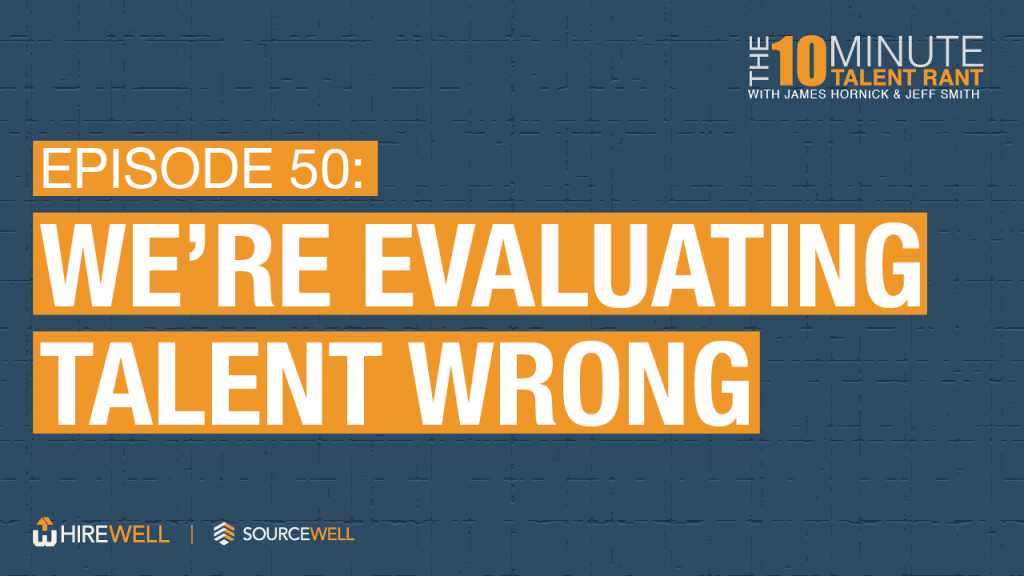 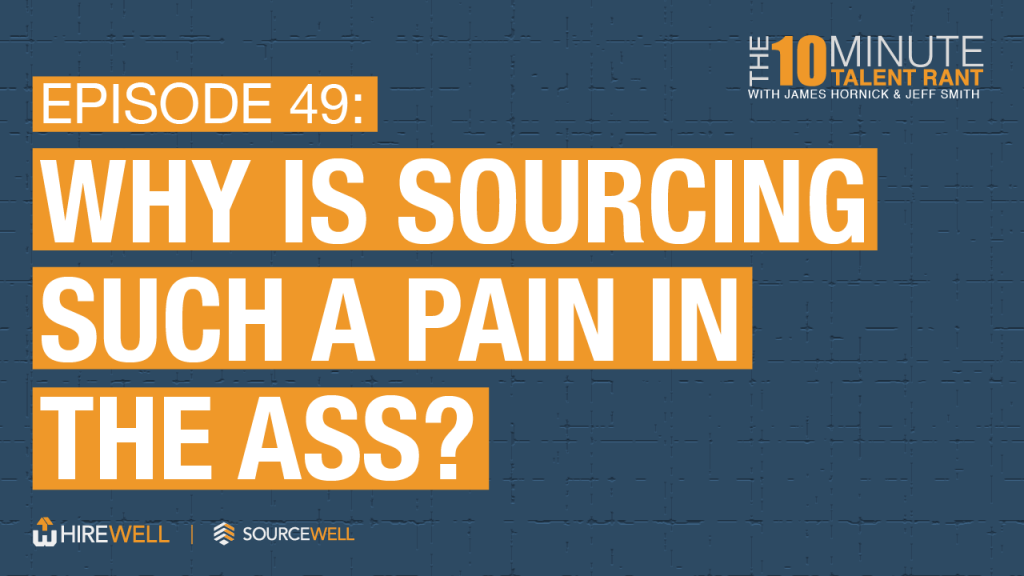