Hiring Is Too Important To Be A Subdivision

The 3 must-have things to run a business:

Without all 3, you’re sunk.

Everyone prioritizes the first two but hiring…that just kinda happens by itself right? Post it and they will come?

Talent Acquisition has evolved. Successful recruiting draws on a variety of skills – sales, marketing, HR, operations, etc. It doesn’t cleanly ‘fit’ inside of any other part of the org.

Here’s a crazy idea: maybe it should be its own damn thing.

Jeff Smith and James Hornick propose a (not so) crazy idea in The 10 Minute Talent Rant, “Make Chief Hiring Officer A Thing”

The 10 Minute Talent Rant is live. I’m James Hornick joined by Jeff Smith and we are on the clock. The 10 Minute Talent Rant is our ongoing series where we break down things that are broken in the talent acquisition and hiring space. Maybe even pitch a solution or two. Before we dig in, all of our content can be found on talentinsights.hirewell.com.

This week’s topic: you need a chief hiring officer. You do. You really do. So laying this up there, every week Jeff and I, we have multiple conversations every week with some great startup someplace, the tie flying, doing cool stuff, got their A round, B round, C round, still struggles with hiring. It doesn’t even have pieces in place.

It’s common. And I like to take a step back, like what do you need to run a business? There’s a lot of different positions that people hire for. Lots of competency areas but bare bones, what’s your minimum viable set up in your organization? One, you need a product or service- something you’re selling. Two, you need to be able to sell it. So you need someone selling it or some mechanism and three, you need to have the people who can keep making the product who keeps selling the products. That’s your three. Everything else there is a nice to have, but if you don’t have all those things, you’re kind of screwed.

Now, here’s the thing. Barely anybody puts that third part on par with the first two. Why is that? Even though we hear leaders at those organizations put those three things at the absolute top of the totem pole, but then when it comes to the execution of actually recruiting that third one becomes woefully inept.

Anyway! I think there’s this natural tug of war between HR and recruiting specifically. And this kind of sets the stage for where it’s housed later and that’s why I bring up HR now. And you think about HR and it’s built to be introspective and thoughtful and intentional by design.

I mean there’s a lot of liability and exposure there. So the patient investor, current team members versus hiring, recruiting- it needs to be nimble and agile and dynamic and creative. And I think like when you get those two sides working concurrently and intertwined, you get this idea, you get this thing where the slowness of HR

can hinder the creativity of talent acquisition, and a lot of cases unnecessarily. Let me put you to the test here. Let’s break it down further. If you’re going to break down core skills of like how are we defining skill sets for both HR and recruiting or HR and talent acquisition? Like what do they need to have in their tool sets?

Yeah. So HR legal competencies, right? Right off the bat, you have to be well-read on employment and legislation. You have to know basically what you can and cannot do. Don’t get your wrist slapped, right? They need to- HR folks need to think strategically about how decisions impact an entire organization so that there isn’t bias, so that there aren’t people that are excluded from certain programs or initiatives or whatever it ends up being.

And I think HR folks are also bound to keeping standards around how companies handle their existing workforce. So it’s super important to just think about that more holistically than it is to just each transaction when it comes to recruiting. Flip side, well what do recruiters need to know or by extension, what does the talent acquisition department need to know?

They need to know enough HR to be dangerous. So you, again, the whole idea, don’t put your company into a legislative mud field. But they’re more salespeople. They’re outselling the organization. They’re outselling the brand every single day. They need to be marketers. We’ve harped on this incessantly. Brand ambassadorships and like selling an opportunity as part of the brand is now part and parcel with the recruiting.

And you have to be forward-thinking relationship builders. You’ve got to think about that entire experience and how it correlates with the brand. So take those two lists, those skill sets, put them side by side. Tell me how they fit anywhere near each other within an organization. It’s hilarious. Yeah. Humbly, I don’t think that they do. So here’s the other thing.

So I will see these takes, it’s not a new take that TA should pull out of HR, because it should. But then it should be, there’s the new take it should be put somewhere else, which it shouldn’t,. That’s really the other part of this conversation we want to have today and why shuffling it around

And they’re not any closer to the front lines that HR or any other part of the organization is. And that’s the key thing is like the people on the front lines, the recruiters have a different perspective than anyone else in the organization is going to have. You’re asking business leaders to solve completely different problems than they’re spending their entire day on. How many jobs do you want one person doing?

That’s another thing we hear all the time is that, like even out of this context, someone leaves and you’re asked to pick something up, but you have to be realistic about what you’re asking one person or one division or one competency to actually do. So it’s baffling to me that in most organizations like a role that ties all these competencies together at the very top doesn’t exist.

Right? So what is the obvious truth? Hiring has become too important at this stage of the game to be a subdivision of anything else. No offense to HR, no offense to marketing- it doesn’t matter. It should not be a subdivision of any of those places. It touches everything like you said, and it is arguably the single most important function of a business at its most vulnerable time, when you don’t have somebody to do the work,

right? So it could report to the CEO. And in most cases, I think both of us would argue that it should, especially in smaller organizations. It could be a COO if it’s a larger organization. But think about this logically, you’ve got other C- old times, CFO, CEO, you know, there’s a couple of C-suite people. Now you’ve got like CIOs have now like intersected into

CISOs and CTOs. The point is marketing officers, right? That has moved away from a chief revenue officer. There’s lots of examples of that. Why haven’t we done this with hiring? It’s literally more important than all of those other things. Even within HR, there’s chief diversity officers and other like parts have come up, but still not chief hiring officers, you know? TA centric.

It’s it’s insane. So what it really kind of comes down to for me is like HR and HR ops and talent just have different goals. One is to attract talent, one is to retain talent but when you boil them down they’re just, there’s different competencies. It’s easy for Jeff and I to see this because we’re external recruiters.

Like everyone in our organization is a revenue generator, but they’re doing the same job literally as your internal recruiters. So if you can’t hire the people you need, you’re losing money. But most organizations still treat hiring as a cost center not a profit center, which I think is really kind of what drives a lot of this mindset.

A, we’re not saying every HR department is the worst place to house recruiting. I want that to be perfectly clear. It’s not. I don’t necessarily think it’s the best- it’s not the worst. We speak to creative and strategic HR folks all the time. They are literally our doors into most of our organizations.

The amount of times we’ve talked to HR people that just want this taken away because they hate it or maybe they started their career as recruiters and like just didn’t like it. So they went into HR- which is okay. I’m the exact opposite. Yeah. And I respect that, but again, instead of building a fiefdom around this idea that you have to have recruiting underneath the HR silo, give it away to somebody else. Give it to a subject matter expert that likes to do it. Yeah. Take away, real simple. Create a chief hiring officer and report to the CEO or the COO. That’s it. That’s your solution.

Yeah, we’re short on clock. That’s a wrap for this week. Thanks for tuning in the 10 Minute Talent Rant, part of the Talent Insights Series, which is always available for replay on talentinsights.hirewell.com as well as YouTube, Apple podcast, Google podcast, Spotify or Amazon. Jeff, thanks again. Everyone out there, we’ll see you soon. 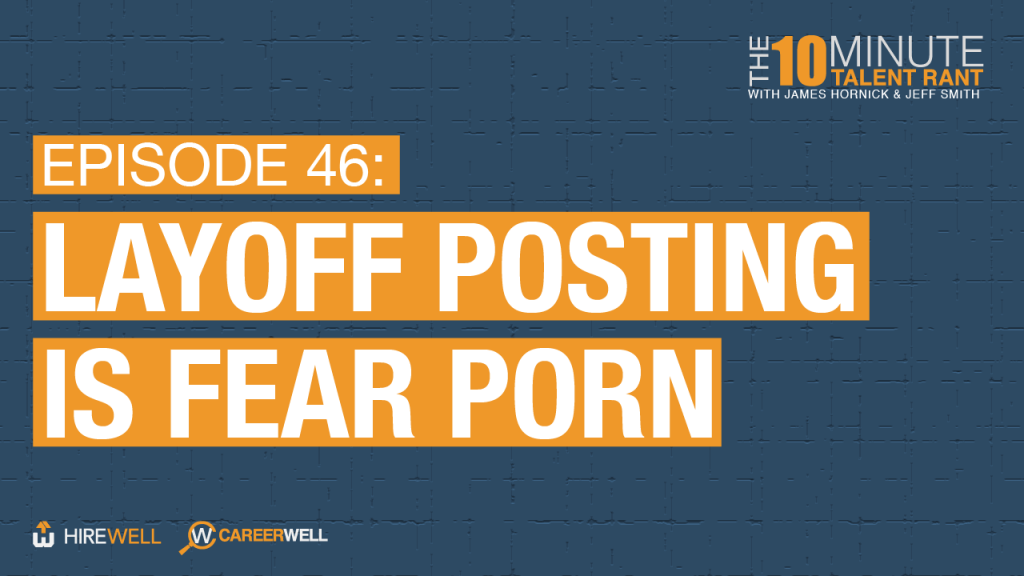 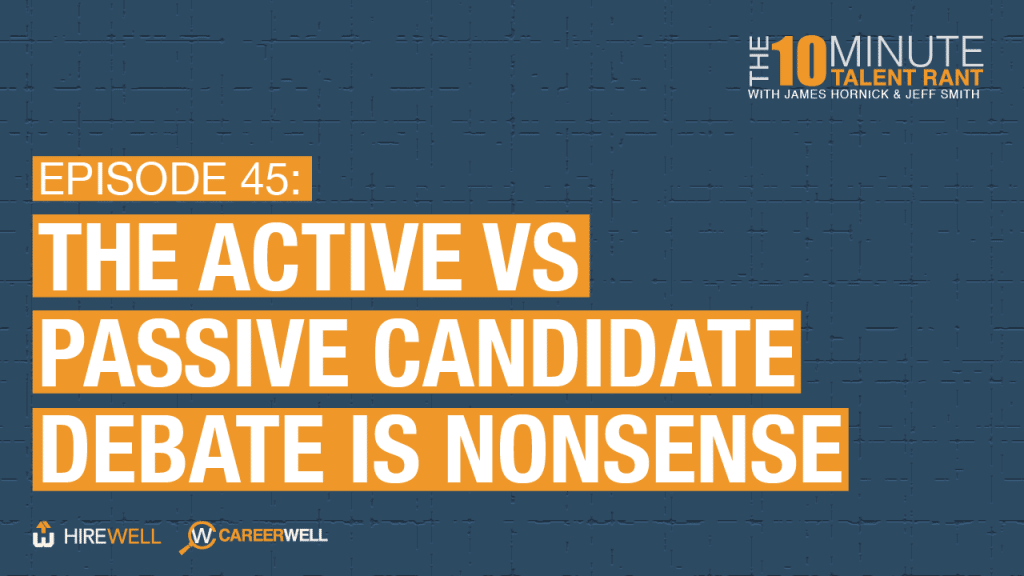 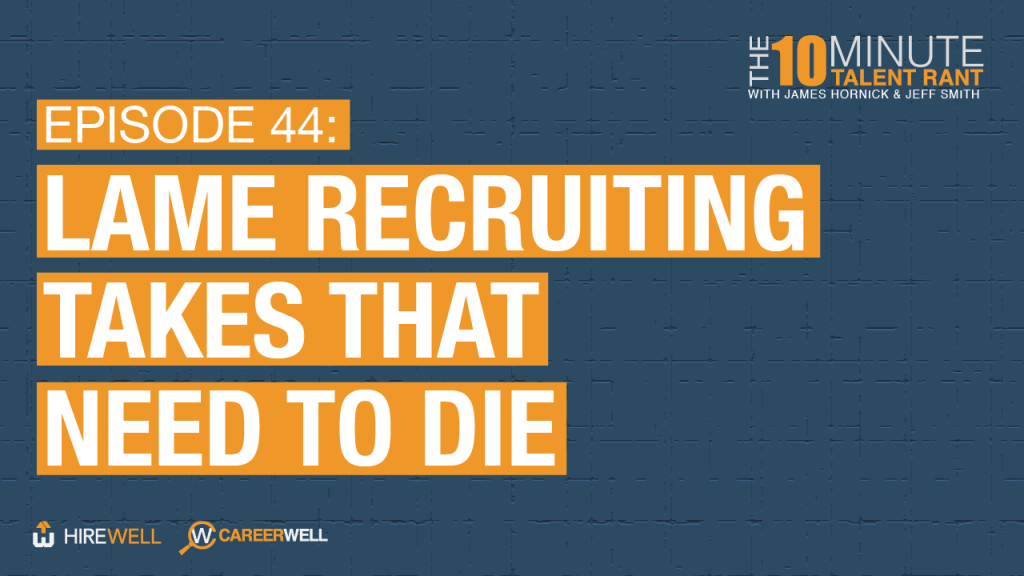 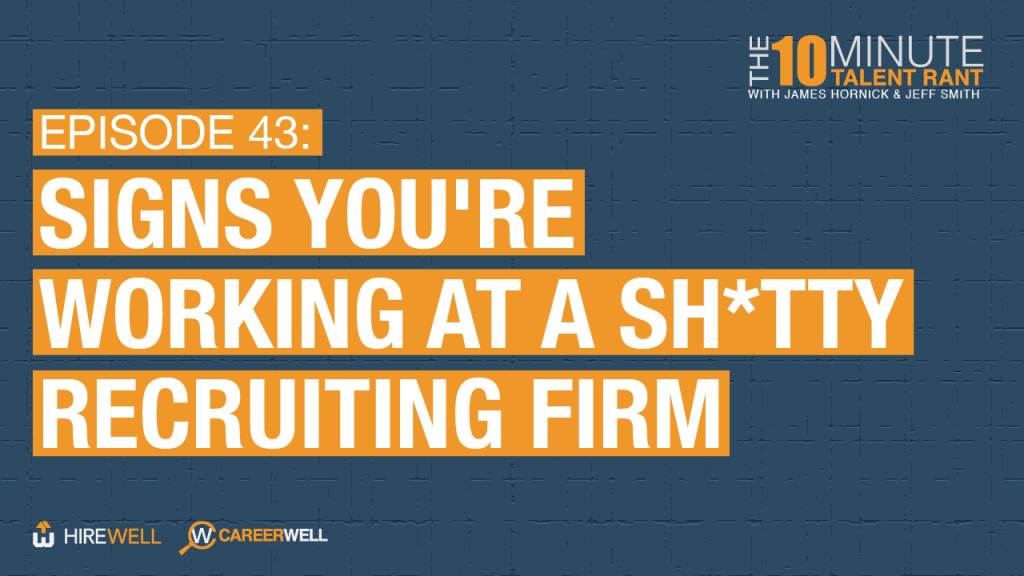 Ever Get Stiffed On Commisions?

Ever close a deal and never see a dime from it because you were on your way out? Our data shows that 60%... 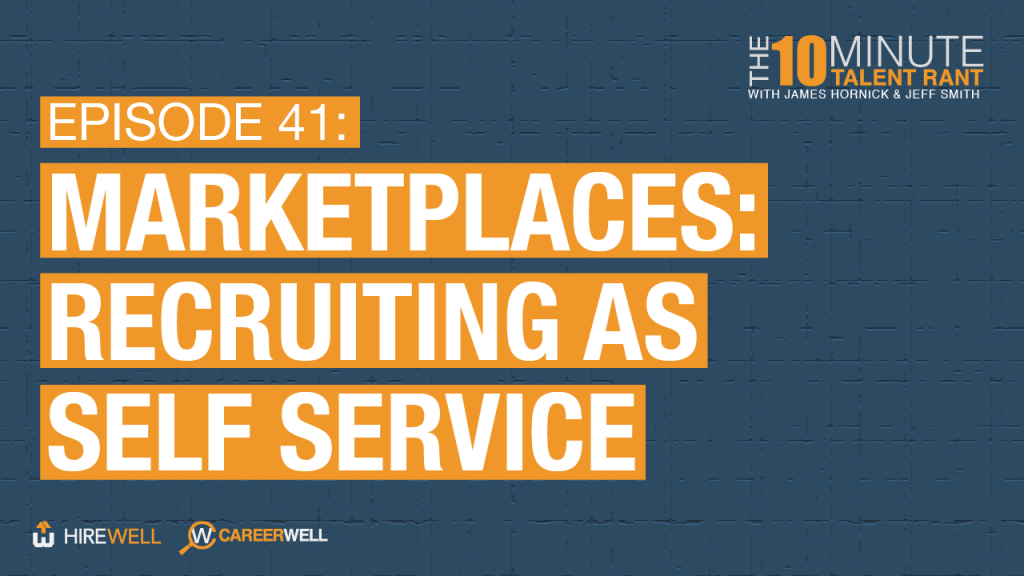 Marketplaces: Recruiting As Self Service

Books. Cars. Video games. Fast Food. Apartments. A ride to the airport. You can buy pretty much anything online. Marketplaces made virtually every...

By Matt Massucci | June 22, 2022
Last year, Hirewell took on a strategic investment from Prytek.  The past 8 months have been a whirlwind of growth. We’ve been heads down doing a ton. Below are some highlights: Finalized two acquisitions (Sourcewell and Rainmakers)Rolled ...
Read More...

Supporting Mental Health In The Workplace

Recruiting As A (Self) Service: Why Talent Marketplaces Will Go From ‘Meh’ To ‘F— Yeah’